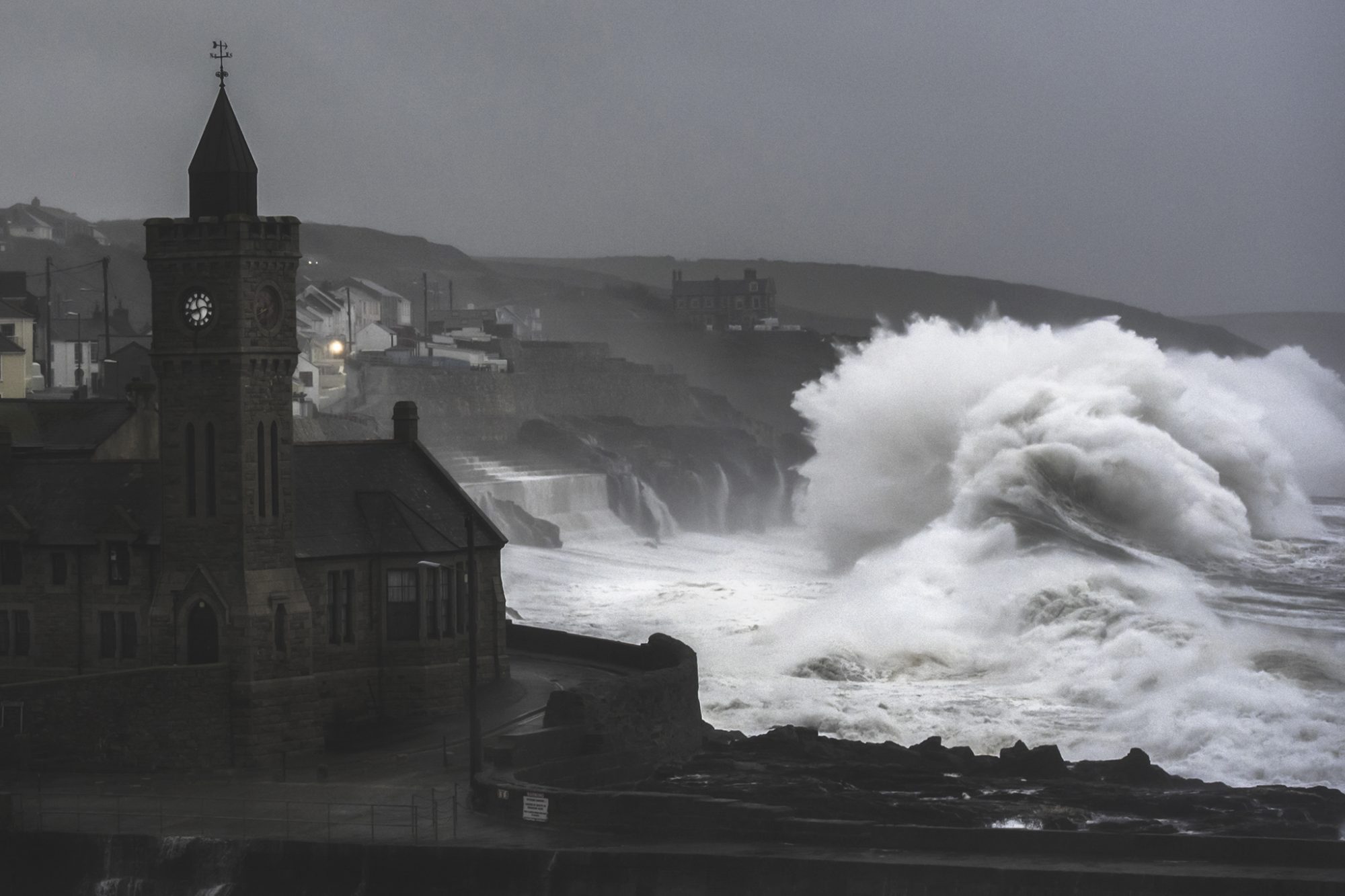 To quote Bodhi from Point Break “twice a century the ocean let’s us know just how small we really are”.  This, probably due to Climate Change, is more like 3 times a year but the albeit cheesy line really does resonate with me. There is nothing quite like capturing a storm unfolding in front of your eyes. You feel tiny and insignificant when you see Mother Nature at her most emphatic. Sixty-foot waves hurtling towards you often look like some kind of scene from a disaster film but if you stay safe there’s no reason why you can’t stand back and admire. 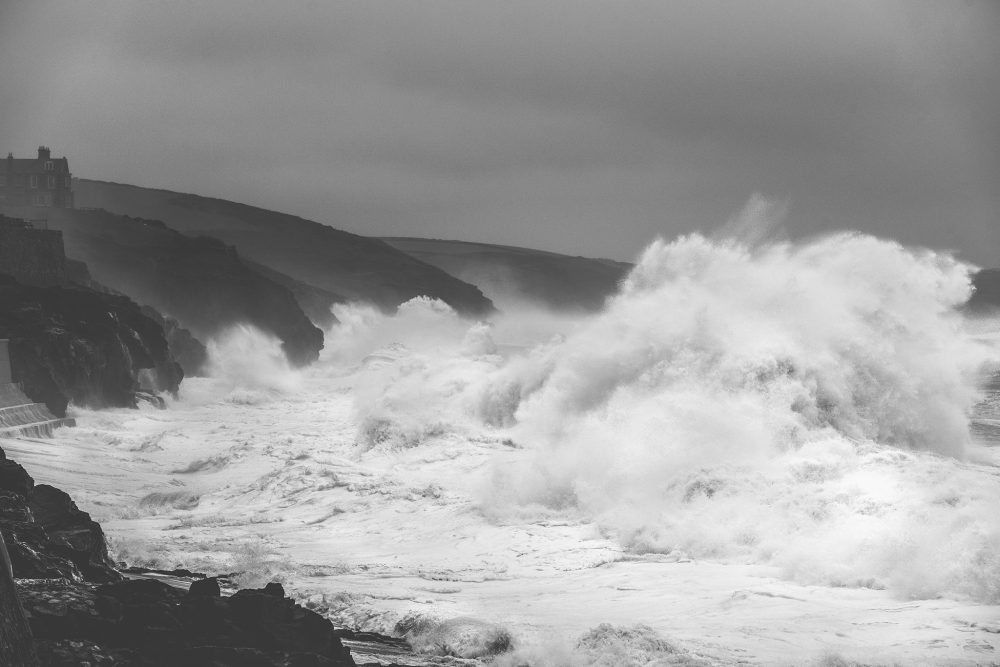 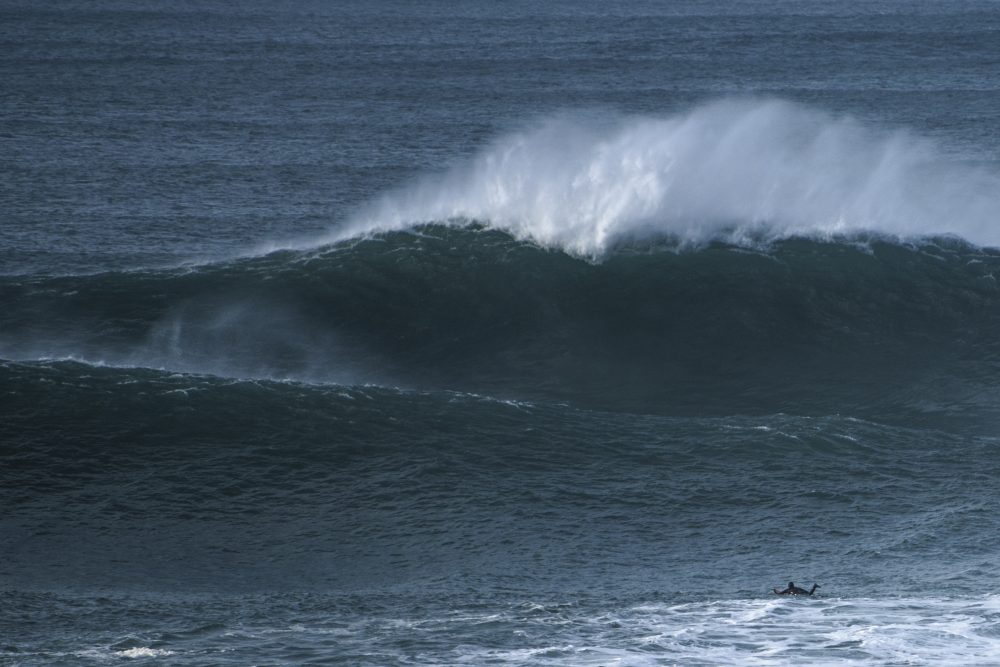 Why do I shoot the storms in Cornwall?

It has become addictive if I am honest. I’m not saying that what I’m doing is some kind of extreme sport but it definitely gives you a massive adrenalin rush and getting the perfect shot is really satisfying. If the swell chart looks big it is almost impossible to resist getting out there in the thick of it with my camera. Searching for the spots that will look most dramatic is awesome fun and truly exhilarating. 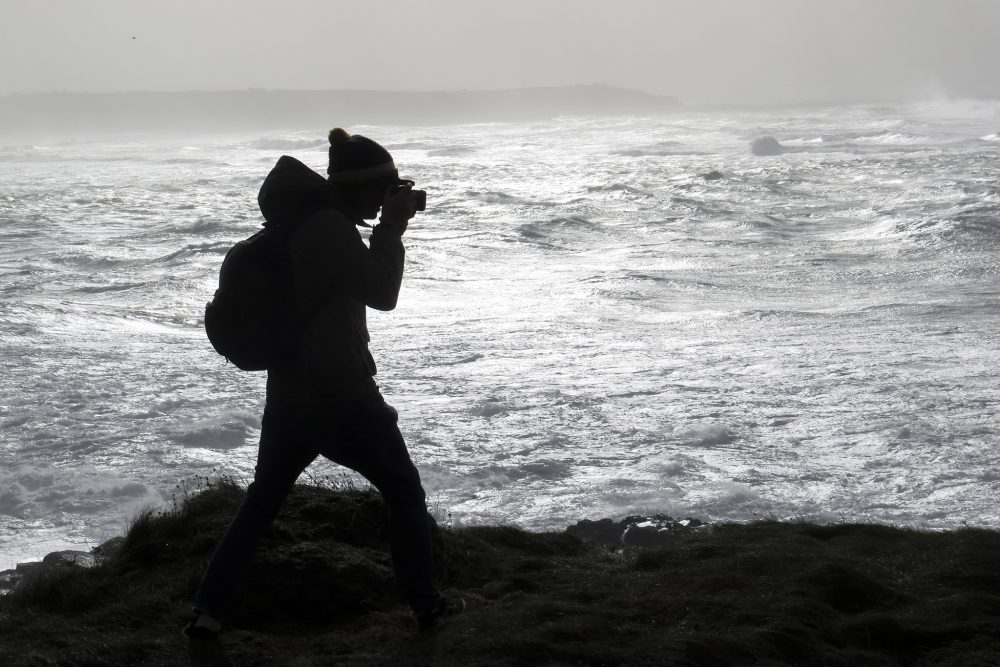 How do I know where to get the best photos in Cornwall?

You need to know the area you are shooting well. I have lived in Cornwall just about all my life and there are still so many spots I’ve not seen. However, over the years I have learned which big wave spots look good on camera. This knowledge, combined with understanding swell and weather charts means I know where to be at what time.  This doesn’t necessarily mean it all goes to plan though! There are so many factors that contribute or hinder when trying to get a good photo. Most recently, with Storm Imogen and Storm Brian I was lucky enough to have some amazing light to work with. Normally when a storm sweeps in it brings with it dark weather and more importantly heavy rain. There’s no doubt my equipment takes a battering which is hard to witness. Even with the sun during storm Imogen I had downpours of seawater drenching me on each big wave that smashed against the cliffs. At the time I just thought about getting the shot and not my poor camera! 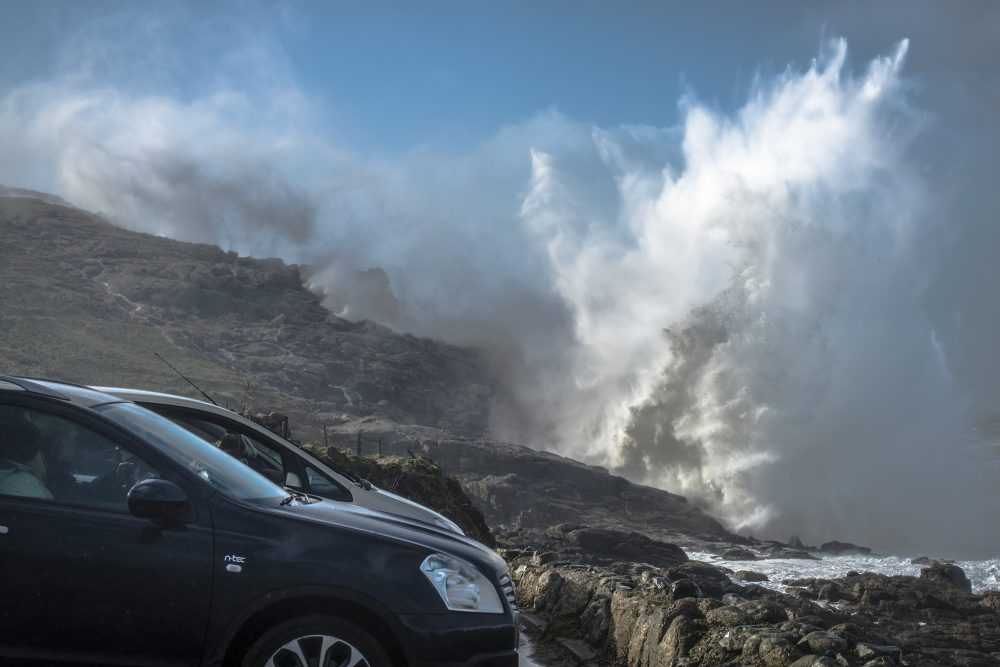 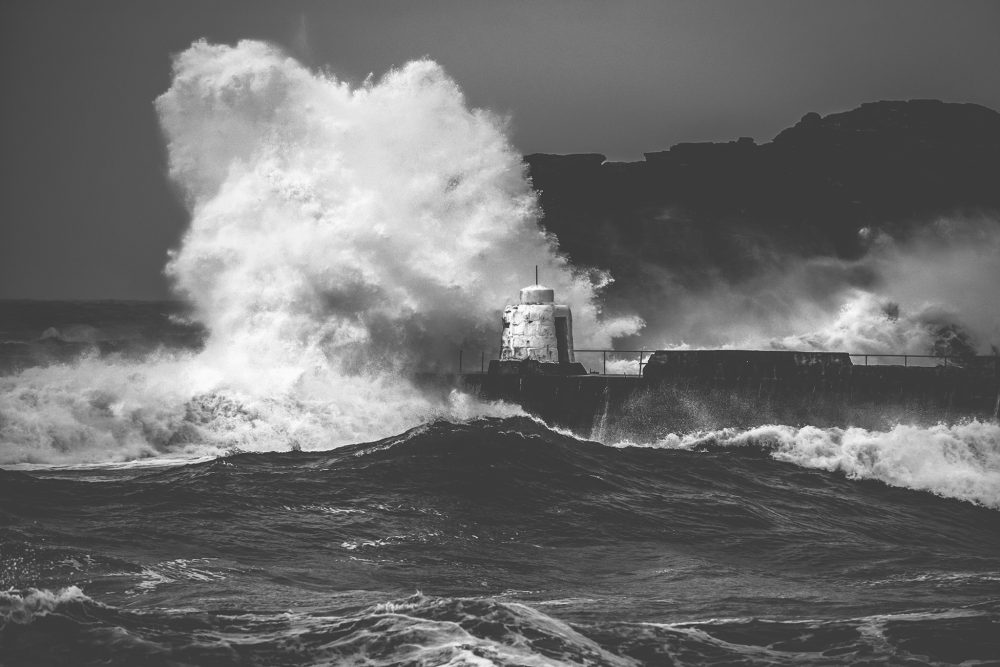 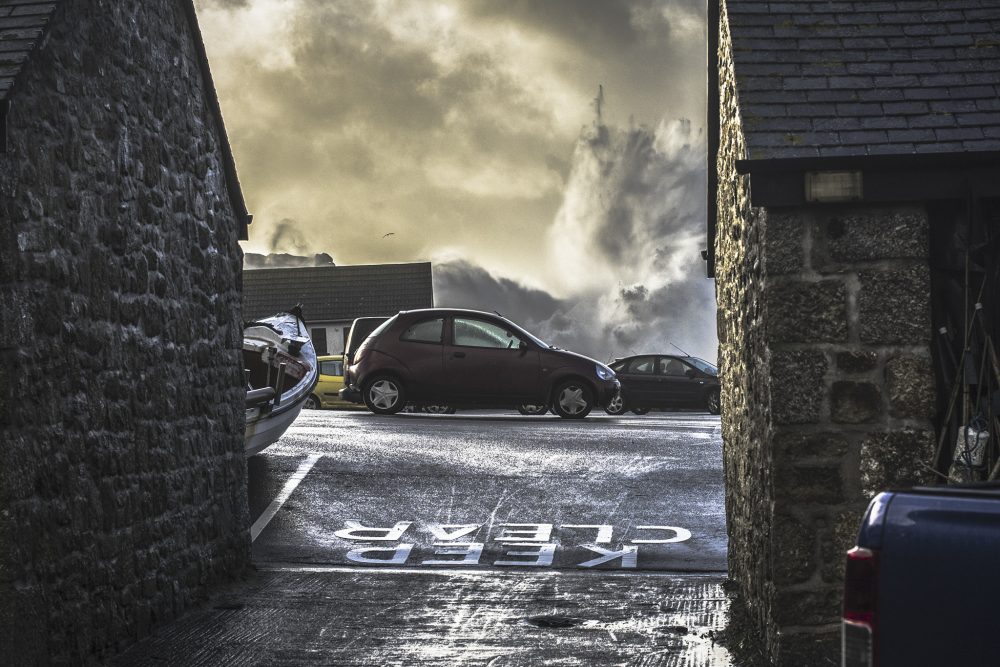 Staying Safe on the Cornish coast 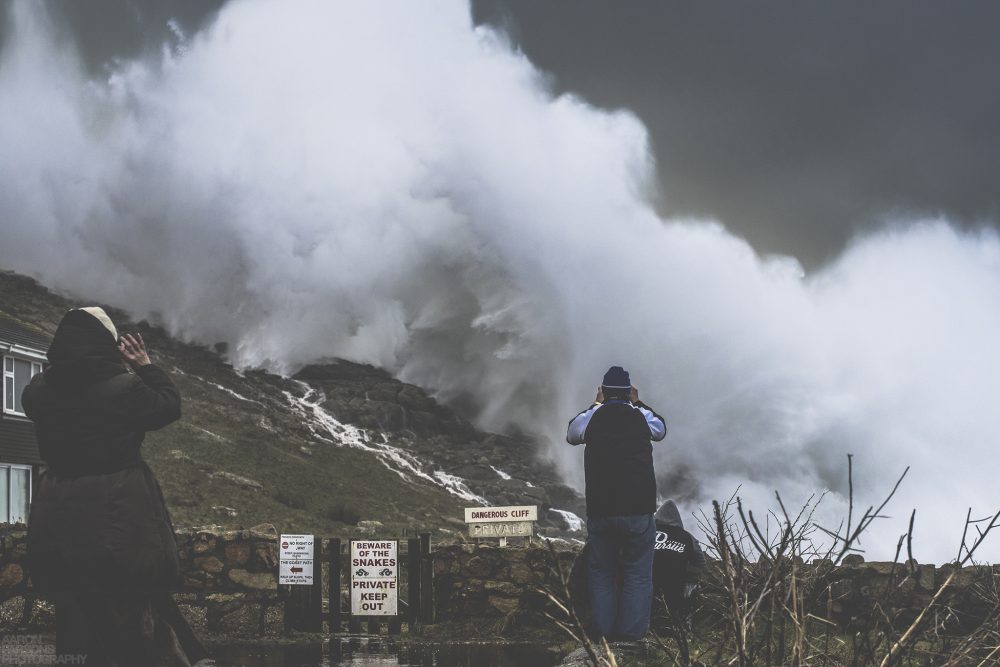 Staying safe is a massive part of “storm chasing”, a term coined for someone who proactively endeavors to watch the storms up close. It’s a term that is now becoming increasingly familiar throughout the country after five winters worth of dramatic weather. It is a horrible side to these storms, but you know that if one is in town there is most likely going to be severe damage to homes and businesses as well as the possibility of injury and loss of life. Storms aren’t good for everyone and I don’t forget that but just concentrate on the artistic side of things when snapping away. 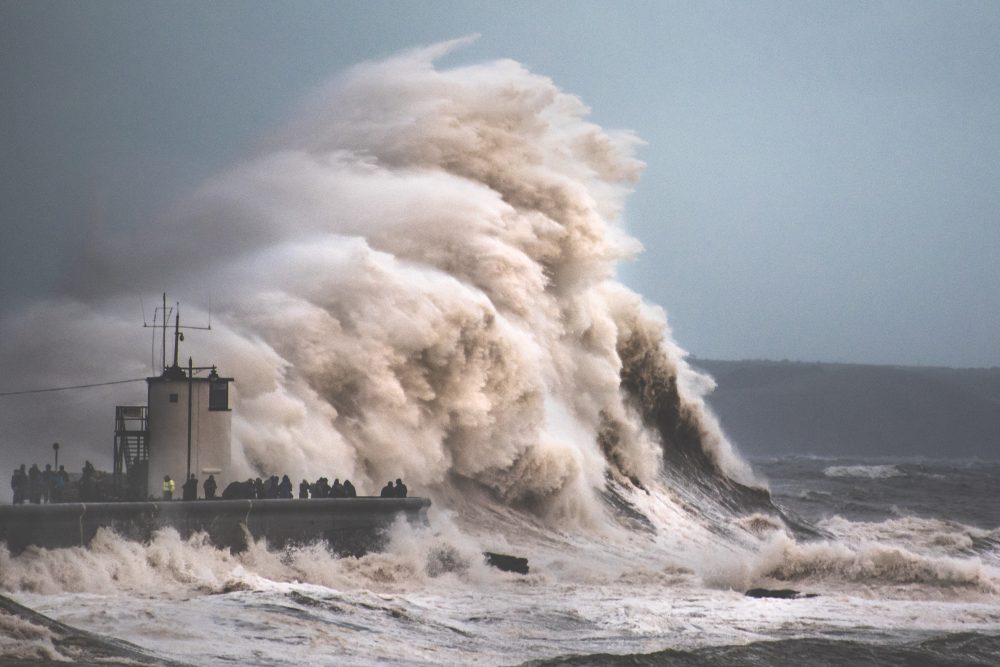 Storm chasing does not need to be dangerous and it is pretty easy to stay safe if you follow what are mainly common sense guidelines. I don’t go anywhere close to waves that can wash you away in an instant; I get caught by sea spray but never a wave itself. There are often times during a high tide spell where a huge rogue wave can roll in and catch people off guard in a split second. You can be gone and pulled into the sea where your chances of getting out alive are slim. To put it simply I make sure I am a safe distance away from the real gnarly stuff! The problem with these storms becoming increasingly photographed and promoted via news and social media is that everyone (myself included) wants to out do each other. There is no point risking your life for a photo in my opinion so stay back and watch from high up, away from the ocean! 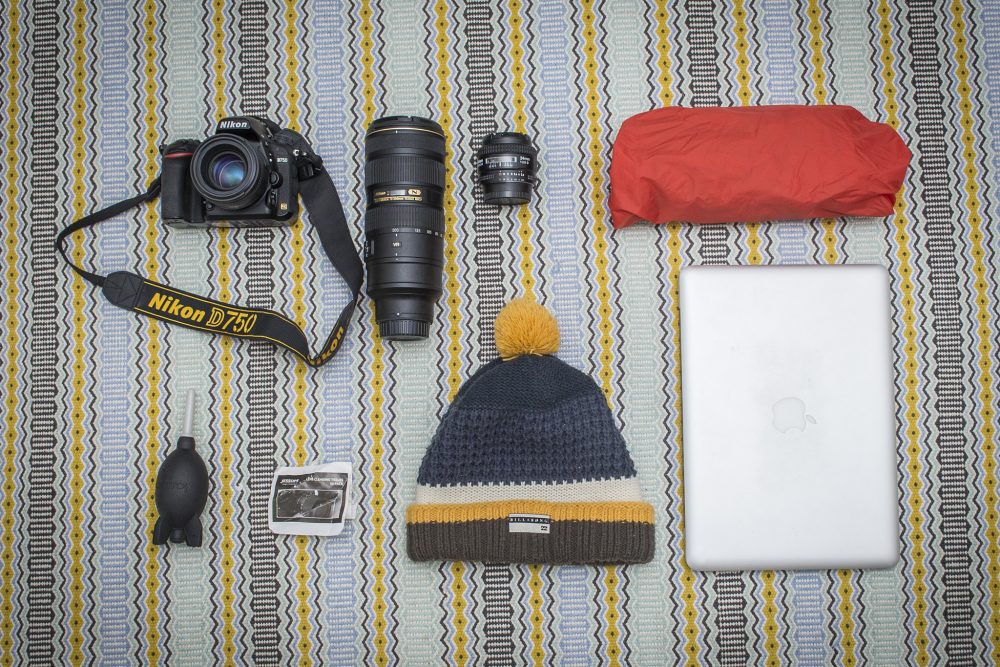 My specific equipment requirements are imperative to a successful storm photography session. As I have already touched upon, my equipment does suffer from the elements. The expensive cameras these days can handle a fair bit of water from rain but sea salt and seawater find their way into everything and can cause problems. My lifesaver would you believe are tiny tissues that are lens friendly. With winds pushing 100mph your glass stays clear for maybe 5 seconds (if you’re lucky), so the need for something to clear that glass without scratching it is vital. Aside from that, plenty of waterproof clothing and more importantly a waterproof rain cover for the camera bag. I always have a change of clothes in the car as I am inevitably going to get soaked through. A warm hat doesn’t go a miss either!

In terms of what I shoot with, I use Nikon cameras and lenses and they haven’t failed me yet (touch wood). The body I use is my D750, a lovely camera well equipped for darker times when the light is dropping. My favourite lens for storm shots has to be my 70-200mm beast. It produces some beautiful quality at weddings and does a fine job capturing wave lineups, surfers and storms too! Using a telephoto lens often helps really accentuate perspective. People have commented on my photos in the past saying they are ‘Photoshopped’ and I don’t blame them, as it sometimes does appear unreal. I never manipulate an image to trick the viewer and my photos always show what is really there but a telephoto lens can just help bring out that all-important perspective when shooting waves approaching buildings or landmarks. 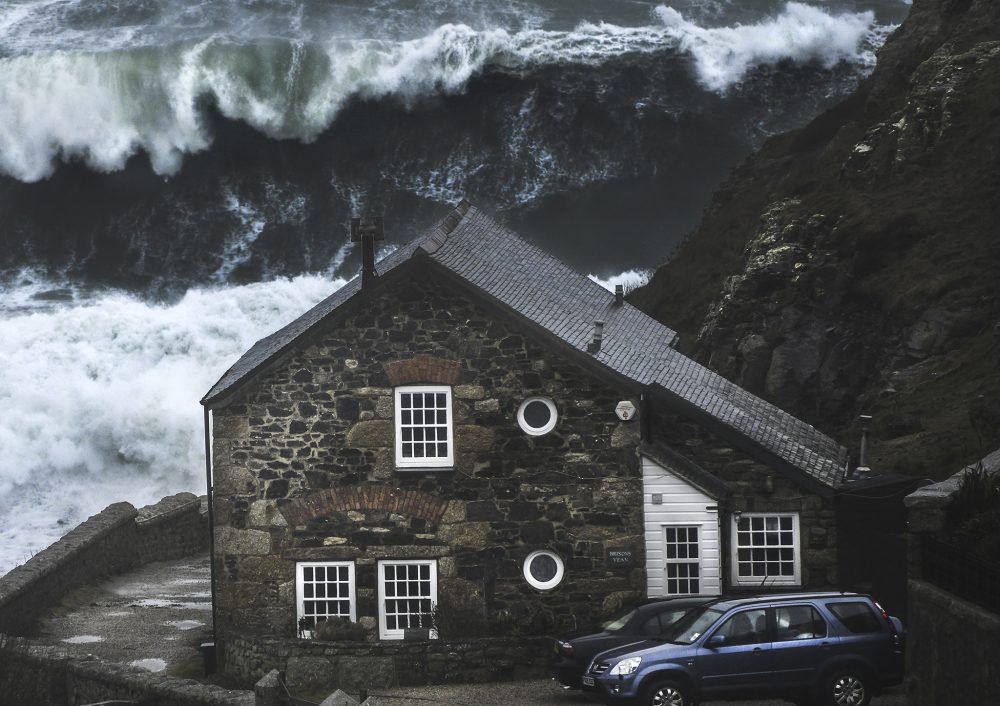